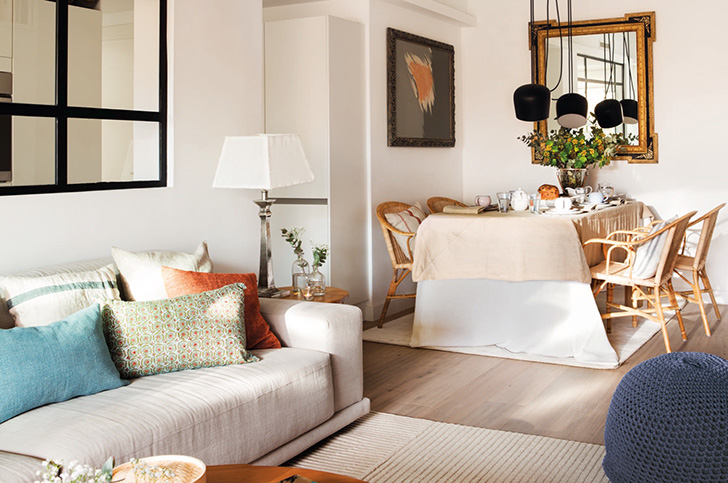 Small homes are not easy when it comes to decoration with a style, but in this apartment in Barcelona everything looks so inspiring. The designer had quite a difficult task – to fit three rooms and kitchen on an area of only 60 square meters. Despite the small size of the rooms, the interiors look bright and cozy, and living in such a home seems to be a pleasure. And these vaulted ceilings are just gorgeous! 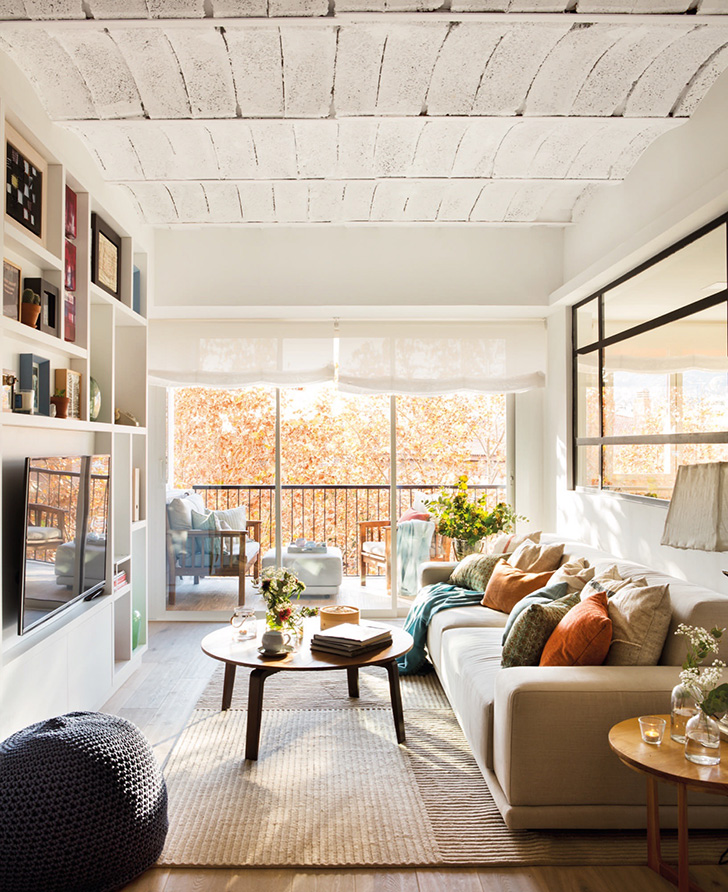 Looking at these beautiful photographs over and over again, we want to pay tribute to the designer. She was able to find the right keys for the perfect apartment atmosphere. And what are these keys, we’ll try to figure out with you together.

In our opinion, the first and one of the most important things, of course, is the color scheme in the apartment. It’s basically white! We have already told you about the wonderful features of this color. After all, white better suites to small apartment design, because it visually increases their size. 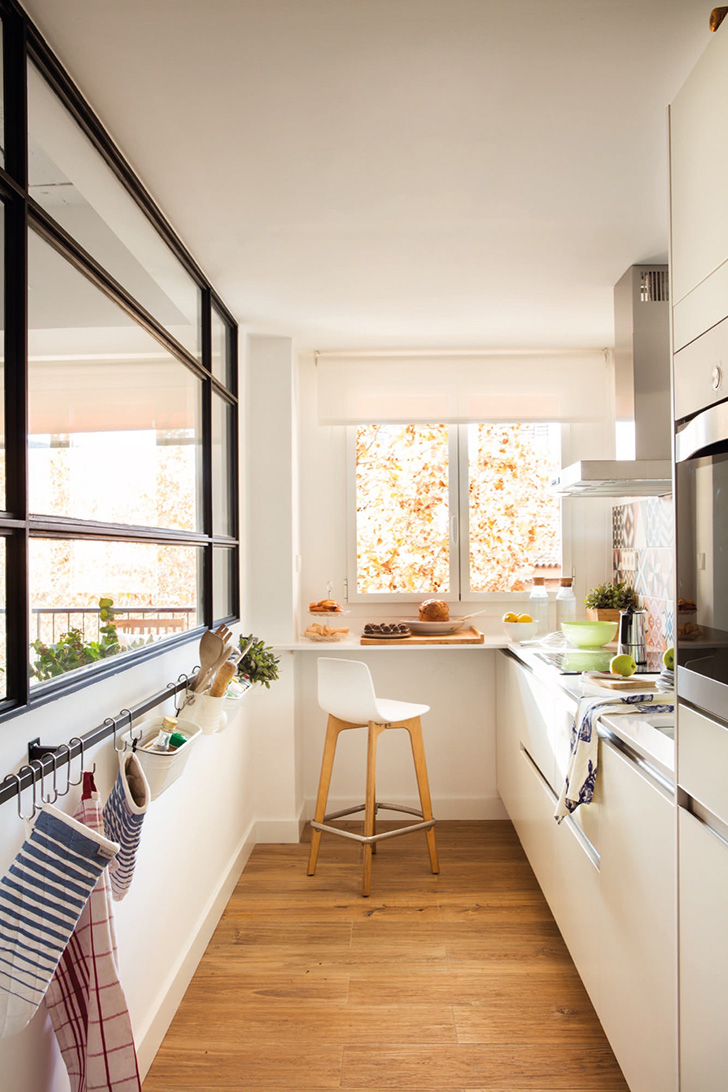 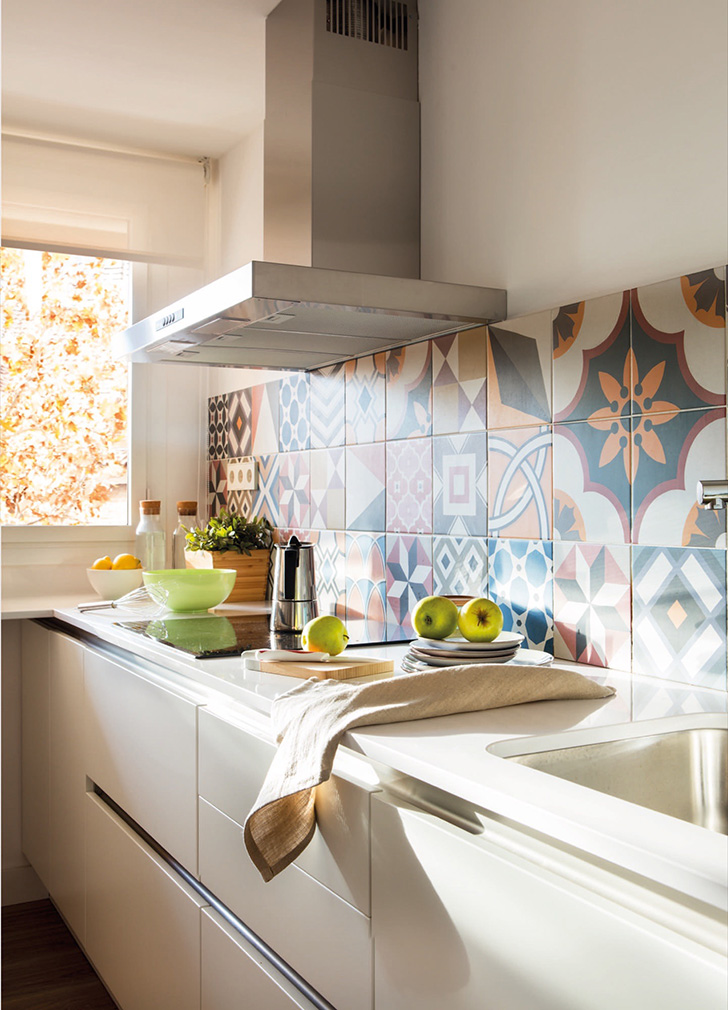 Also, the furniture and decor pieces are chosen so appropriately and stylishly, that you want to watch them for hours. Let’s start with the living room. This is the largest room in the apartment, and it consists of two zones – dining and seating areas. Mirror over the table is not just a beautiful thing, but also an important detail which plays its role. Those, who have been with us for a long time, already know that large mirrors fill the room with light and also play the role of an enlarger. 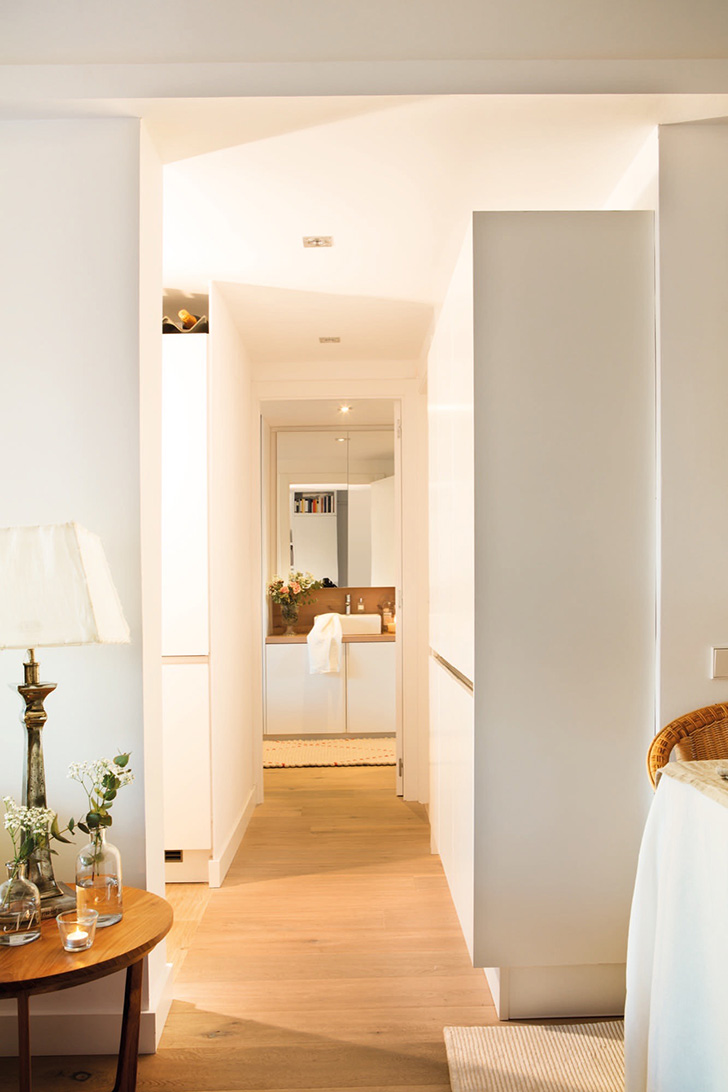 Between the livingroom and the kitchen there is a glass partition. It looks quite different from how we typically imagine it, but it still performs its function perfectly. You guessed correctly – it also visually makes the room even bigger. But it fits into the kitchen even more than into the living room. After all, the kitchen itself is not that big and even oblong. Therefore, the partition plays a very important role. The kitchen itself, despite its size, looks stylish and practical, which is very important in an apartment with such total area. Very unusual tile patterns and its color became a highlight, diluting the white interior of the room. 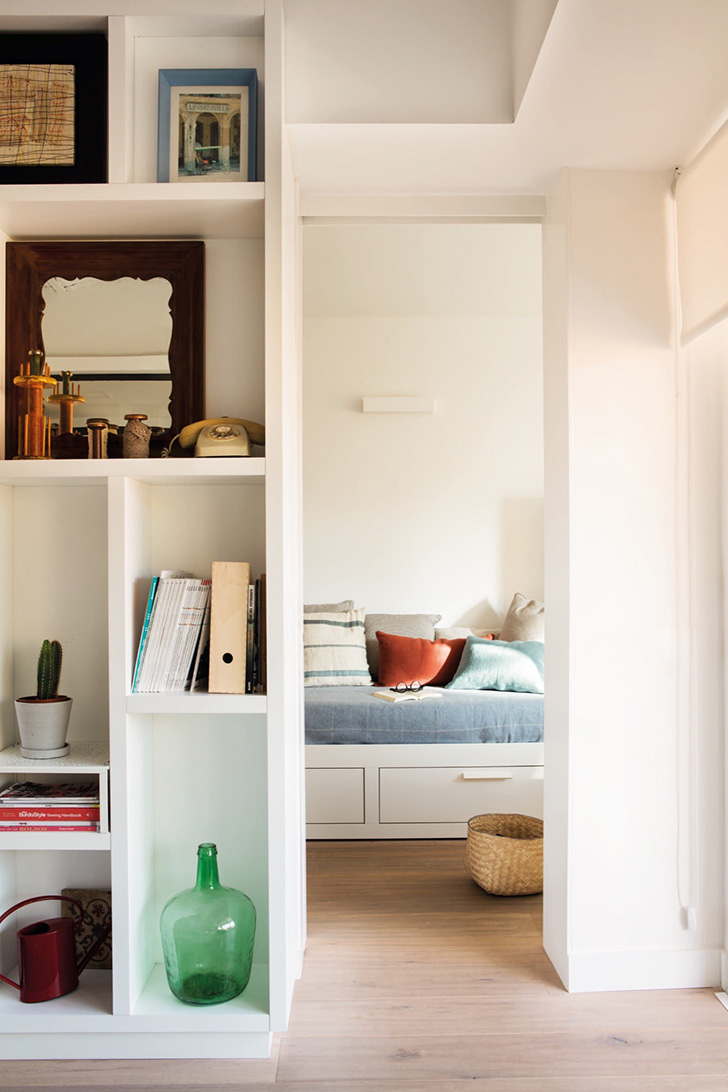 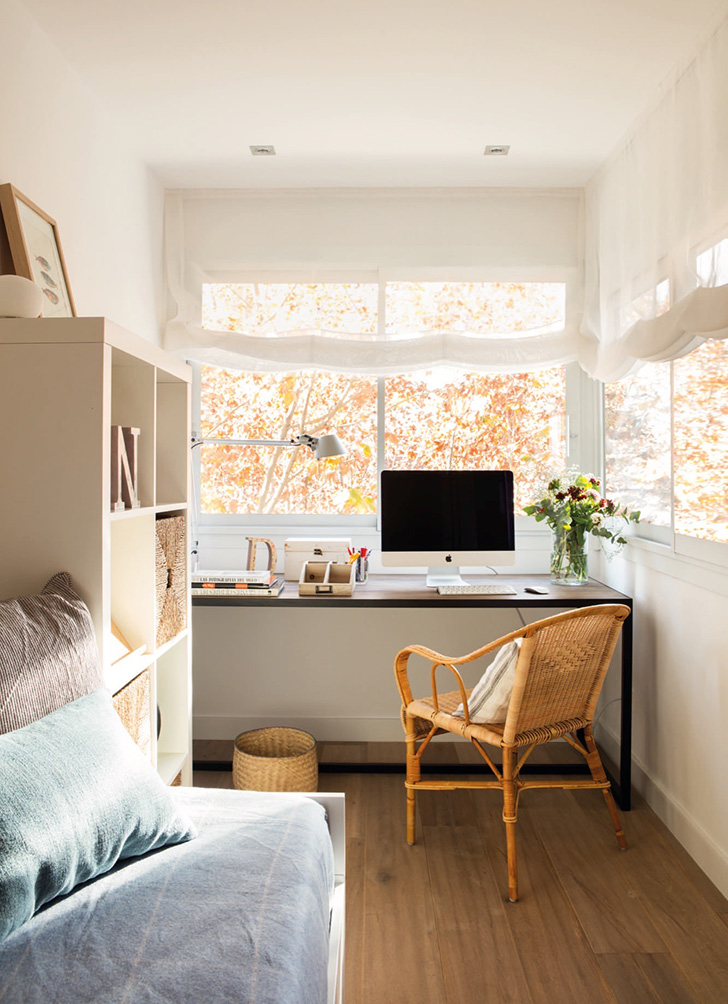 There is a place for two more rooms in the apartment. One of them – a bedroom, and the second one – most likely an office and a guest room at the same time. To the guest room we can get directly from the living room. Did you notice that there is no door that opens into the room, or vice versa? In fact, the door exists here, but it is very cleverly designed. In order not to occupy the place with an open door, it was placed inside the wall, so it became retractable. This is a very functional and very reasonable using of space. Another achievement of the designer. 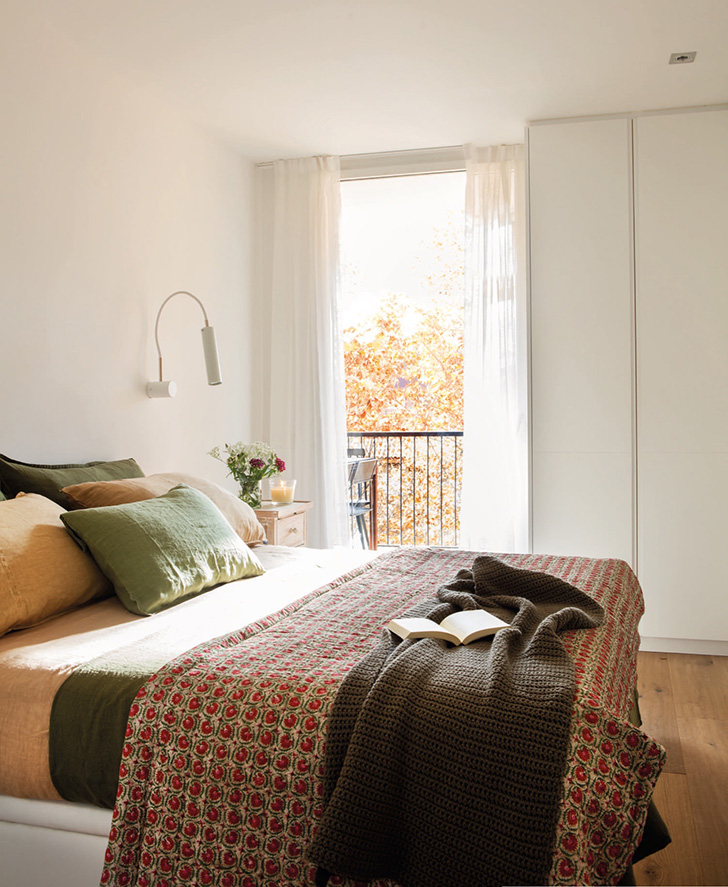 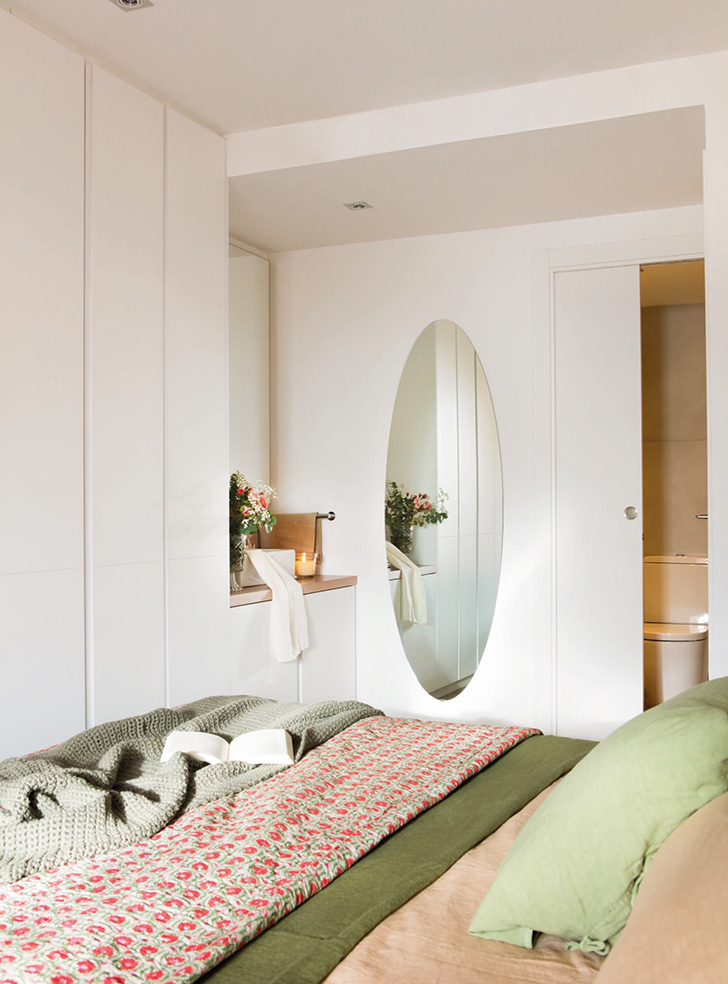 One more thing that we loved. Despite the size of the apartment, it has two bathrooms. One is ensuite to the bedroom, and the second one is accessible from the kitchen. Actually, the first one is not that big, so the washbasin is right in the bedroom. Great solution! 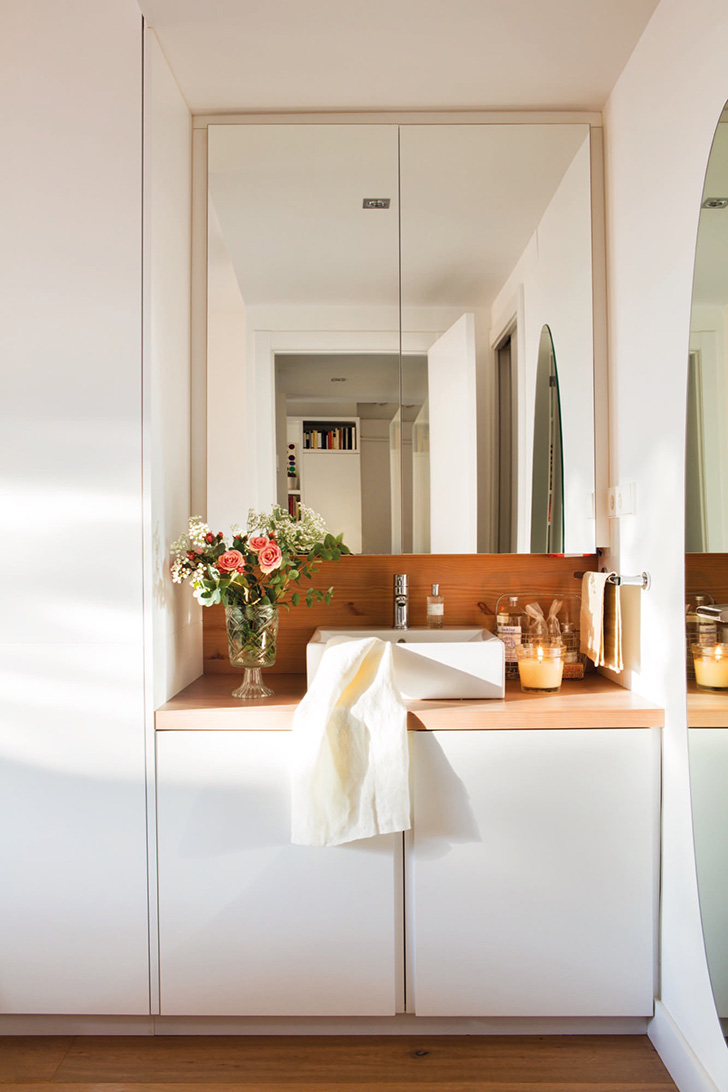 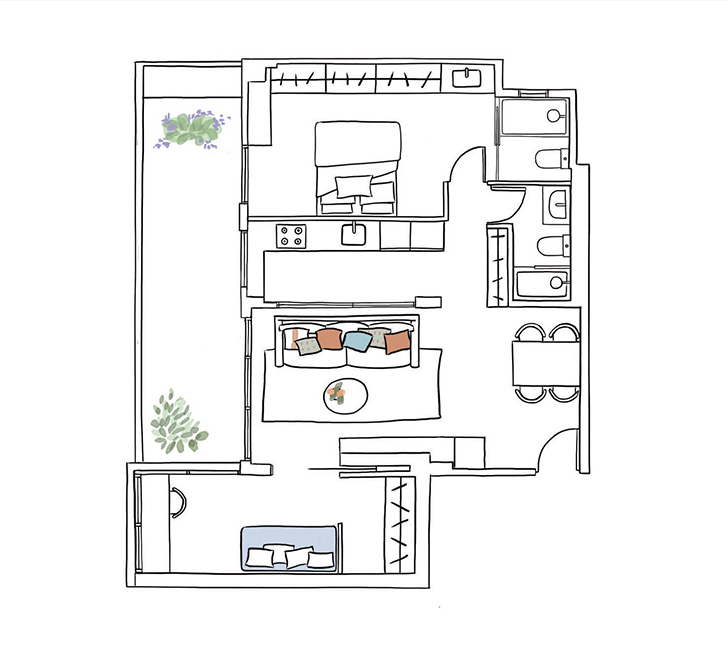